A Break for Deer 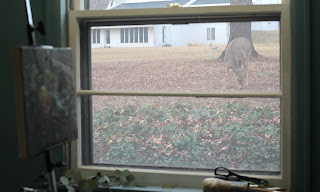 The deer were nearby the house all day today. Adam and I enjoyed taking quick breaks from our paintings as one or the other of us would notice them wandering by. I needed a break from studio work this evening so I decided to do a small sketch of the deer as I observed them from the window. I was able to get in a quicko (15 min) study of one of them before it got too dark to see anything. 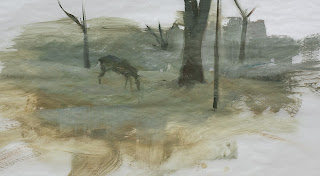 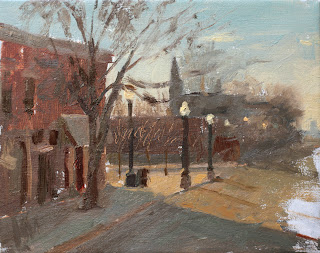 Adam and I went painting with the Missouri Valley Impressionist Society last Saturday. We had a great time painting in Independence Square! This is my painting from the day- there's a lot I would still work on if I had had the time before the light changed too much. If I do want to do a larger piece in the future, a plein air study like this would be invaluable as a color reference.
Posted by Andrea Orr Clague at 4:55 PM 0 comments

This is what my palette and a small section of my painting looked like after today's work. I'm not sure how much of the painting will stay this way- it may look like a completely different piece when I finish with it! The colors in this still life are incredibly inspiring- I won't give too much of a hint as to what the full piece is, but it is predominately blues and greens- a color scheme I haven't used too much for a still life yet.
Posted by Andrea Orr Clague at 5:35 PM 0 comments

In October 2012, I got to marry my best friend, artist Adam Clague. We are so blessed to be able to paint together, and are looking forward to what the Lord has in store for us in 2013! 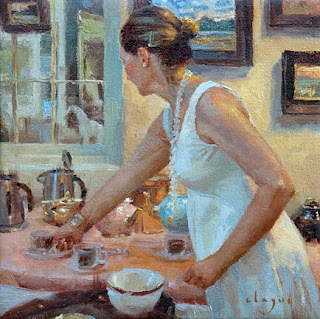 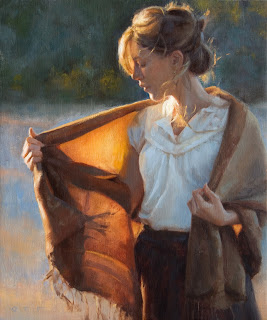 I am incredibly excited and blessed to have my painting "Aglow" chosen as Best of Show in Legacy Gallery's 2012 Scottsdale Salon of Fine Art. 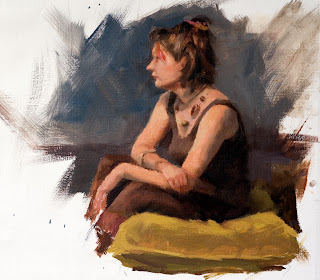 Amanda- 11x14 oil
The group I paint with on Fridays generally has the same model and pose for three consecutive weeks. I usually just go one time per three-week session since I try to finish up a piece within one three hour time frame. For this piece, however, I went back a second time to finish up what I started the first week. I was semi-pleased with the work I had completed from the first week's session but toward the end of the second session, I decided that I had ruined it. The piece lost a bit of its freshness and spontaneity, but I think I learned a great deal by going back and reworking, so it was not a lost venture. I wish I had photographed it in its initial stage- seeing it next to the final piece would have helped me learn even more. These alla prima studies are simply for my own learning and benefit; if I end up with something worth framing at the end, it's great, but the opportunity to paint from life, as well as the support from the other artists in the group is more than enough incentive to keep me going back.

I usually tape a piece of linen canvas to a board to work on for Friday life sessions- it saves me the time of stretching a canvas and is easier to put into storage. I can always choose to stretch a piece later if I decide a piece is good enough to put on a wall! 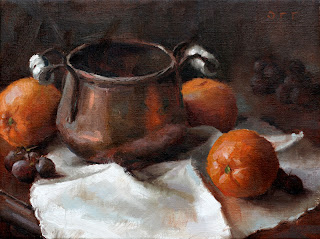